Oxidative stress is an imbalance in which organism’s multiple antioxidant defense mechanisms are insufficient compared to its load of reactive oxygen species (ROS). ROS can react with a large number of biomolecules including lipids, proteins, and nucleic acids, irreversibly modifying cellular components.  As a result, oxidative stress is a critical underlying condition that plays a major role in the pathogenesis of many diseases.

Free radicals are so highly reactive and short-lived that direct measurement is usually not possible. Rather, the level of ROS are typically evaluated by measuring biomolecules that are derived from interactions with free radicals. We are often asked what biomolecule or assay is best to evaluate oxidative stress. The answer to this question really comes down to what type of sample you have and how much sample you have to work with.  The most versatile biomarker for oxidative stress are isoprostanes, which are present in a variety of samples including blood, urine, saliva, and cell lysates.  Isoprostanes are a group of 64 prostaglandin-like compounds derived primarily by free radical mediated peroxidation of free or esterified arachidonic acid. Measurement of a one specific Isoprostane known as 15F2t-IsoP (previously known as 8-iso-PGF2a) is now a well-established biomarker for oxidative stress and considered by many to be the gold standard for oxidative stress in living organisms. 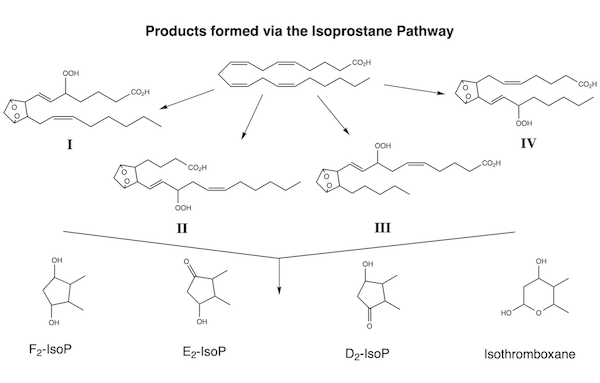 Isoprostanes and their relationship to oxidative stress were discovered twenty years ago by Jack Roberts and Jason Morrow. They employed GC/MS analysis and focused on 15F2t-IsoP because it was the sole isoprostanes for which a synthetic standard was available. Since then, several methods for measurement of isoprostanes have been developed, including easy to use ELISA kits that allow for rapid, relatively inexpensive analysis of up to 40 samples per plate.  It is generally agreed that LC/MS/MS using deuterated controls is the most sensitive and specific method that enables separation of the individual Isoprostane isomers. However, ELISA offers speed and a high sample throughput.  The antibodies employed in ELISA of 15F2t-IsoP have now been shown to react with additional isoprostanes. However, in contrast to enzyme catalyzed reactions, all of the isoprostanes are generated in roughly identical amounts when free radicals attack arachidonic acid.  Indeed, it is now known that the original GC/MS studies developed by Roberts and Morrow actually detected 4 isoprostanes that coeluted as a single peak.

A critical, yet often overlooked, factor when measuring Isoprostane in blood and urine is glucuronidation.  Oxford Biomedical was the first to report that a significant amount of 15F2t-IsoP is glucuronidated, and there is a lot of inter-individual variation in the extent of glucuronidation. In a study of a large cohort of human subjects, we found that, on average, 50% of 15F2t-IsoP is excreted as glucuronides, with the inter-individual variations attributable to variations in the expression of UGTs.  Since the glucuronide adducts of isoprostanes are not detected by GC/MS, LC/MS/MS or ELISA, glucuronidation adds a lot of variability to the use of isoprostanes as biomarkers for oxidative stress.  In fact, given these findings, it is remarkable that isoprostanes levels in early studies correlated with oxidative stress so well. Fortunately, this interfering variable can now be eliminated. We strongly recommend that urine samples be pretreated with glucuronidase prior to ELISA and we include glucuronidase with all of our urinary Isoprostane assays.  Our work to date indicates that isoprostanes in saliva, at least for some mammalian species, are not glucuronidated and that the levels in saliva correlate well with those in blood, making saliva an interesting alternative biofluids for assessment of oxidative stress.

Another critical aspect of isoprostanes analysis, regardless of the detection method, is sample preparation.  Isoprostanes in serum samples have to be subjected to solid or liquid phase extraction to remove a host of interfering substances. This adds to the complexity and cost of the assay and can be a significant source of error unless one includes an internal standard as is typically done – by addition of a deuterated isoprostanes - prior to sample preparation for LC/MS/MS.  In contrast, we have developed a buffer system that virtually eliminates interference for urine and saliva samples, allowing them to be analyzed directly by ELISA without the hassle and potential error associated with extractions.

Another byproduct of lipid peroxidation by reactive oxygen species is malonaldehyde (MDA).  MDA was recognized as a potential biomarker for oxidative stress long before isoprostanes, and the measurement of MDA based on its reaction with thiobarbituric acid as the ThioBarbituric Acid Reactive Substances (TBARS) assay.  This older colorimetric method does not require antibodies or complex analytical equipment. However, the standard TBARS assay does require boiling the sample with a strong acid, which generates interfering chromophores – especially when performed without suitable controls. Therefore, the traditional TBARS assay is rightly and broadly criticized for lack of specificity and sensitivity. We have developed an improved TBARS method utilizing a mixture of acids that can be run at room temperature, and that is specific for MDA.  If you are performing TBARS analyses using your own reagents, be sure to improve the specificity of your assay by running blanks for each sample to reduce error introduced by boiling.  Or, consider using our advanced TBARS kit to quantitate MDA.

Want to dig deeper? Check out these white papers:

Or check out these recent publications:

We provide biomedical researchers with the best tools available for the analysis of Oxidative Stress and Chronic Inflammation – two of the most important risk factors that play key roles in the development of a wide range of human illness, including cancer, cardiovascular disease, diabetes and neurodegeneration.